Barbara Zilly is an American-born artist who has spent much of her life living and working in Europe, all the while pursuing her natural talent for portraiture.

Barbara’s life as an artist began at age seven with the gift of a book from her mother. Her mother had grown up in a home filled with magnificent art, and she wanted to introduce her daughter to the draw and power of great works. To this day, Barbara remembers the first time she opened, “Famous Paintings: an Introduction to Art,” and fell in love with the work of such masters as Degas, Chardin, Velasquez, and Manet.

When Barbara was eleven, her mother passed away after a long illness.  The love for art that her mother had brought into Barbara’s life now became her source of consolation, reflection, and companionship. She used pen and ink and pencil to draw illustrations inspired by the works of Tasha Tudor and Arthur Rackham that she’d seen in her treasured childhood books.

Her formal university studies introduced her to studio art and art history, and her modeling career in Paris gave her an appreciation for the power of capturing precise expressions.  Her life in Athens was one of fashion design and experimenting with different mediums beyond portraits. But all the while her first love remained drawing. 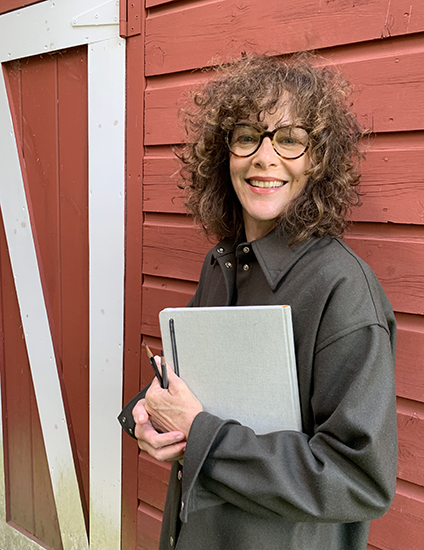 For the past decade she’s lived between the Aegean Greek island of Mykonos and Manhattan, creating portraits that capture the essence of her subjects, be they adults, children, pets, or even homes.

She’s spent a lifetime mastering how to capture each face’s unique expression, humor, and mood, in portraits where light and shadow (chiaroscuro) help tell each subject’s individual story, and how to find that single line or stroke of charcoal that pops the drawing to life.

Each portrait presents a different challenge, but that’s what Barbara loves about her work: finding the key that unlocks the personality for all who know the subject to recognize and forever treasure.